You are here:  Home » The Legal Process

Ladies and gentlemen of the jury… 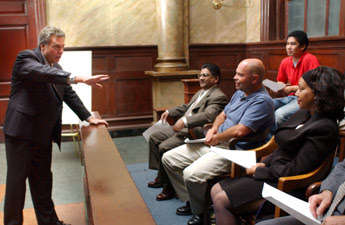 We’ve all heard these words on countless episodes of Law & Order, or at the movies, but have you ever wondered what really happens in a Texas jury trial?

From two French words, meaning “to see” and “to speak,” this process allows the lawyers for each side an insight into the panel of potential jurors, from whom the actual jury is picked. It’s a somewhat informal question and answer session where the judge, and frequently the lawyers, will be given an opportunity to ask individuals about any bias or prejudice they may have. After this process, which can take some time, a jury is empanelled, and after being given some instruction by the court, the lawyers are given an opportunity to make…

The lawyers stand, usually the attorney for the Plaintiff (the complaining party) first, and provide the jury with a road map of the evidence they intend to present during the trial. Often the lawyers preface their sentences in these statements with phrases like “The evidence will prove…” or “Witness ‘A’ will testify that…” This is often thought of as “opening argument” but it isn’t in fact argument. It’s supposed to be a sort of introduction to the evidence. Most lawyers will use it as an opportunity to begin arguing though, but their argument won’t be a verbal fight, it will be an exercise in the art of persuasive rhetoric.

After both sides have finished presentation of evidence, the jury will be asked to retire, and the lawyers and the judge will confer over the jury charge. This is the document that will instruct the jurors as to what they must do in order to find for one side over the other. In a negligence suit in Texas, the jurors are asked questions like this: “Did the negligence of Defendant proximately cause the occurrence or injury in question?” Terms like “negligence” and “proximate cause” will be defined in the charge too, so the jurors will understand them.

After the closing arguments, the jury will retire to deliberate and reach a verdict.

After deliberations have concluded, and the jury has made a decision, it will return to the courtroom and deliver it’s verdict in open court.

Sometime after the jury has delivered it’s verdict, often a few days or weeks later, the court will enter judgment on the verdict, after applying offsets or adjustments to the jury’s verdict that the jurors did not hear about, so as to increase or decrease the value of the verdict.

Because our representation of the victims of auto accidents requires us to know how the Texas Transportation Code works with the Texas Penal Code, we offer misdemeanor and traffic ticket defense in and around Dallas. Visit any of the following sites for more information: